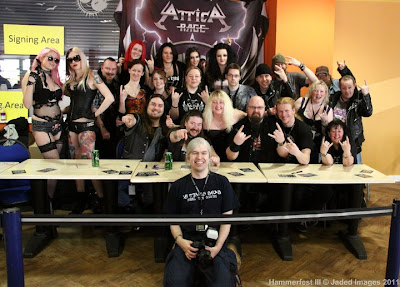 Hammerfest came and went last weekend, and was a blinding success for the band. Attica had a pretty impressive set with dancers and fireworks. This resulted in me gettin burned by sparks and getting doused in kerosene, leaving me kinda stinky for the rest of the night. At this point in time I haven't had a look at the footage due to being busy with University work but I think the footage will turn out well enough to finish the film in style. So with the festival filming and all that out of the way that is my filming commitments complete with the band. So without getting too sentimental (because lets face it - I don't do that) I'd like to take the time to thank everyone who's been involved in my life, filming and beyond, over the past 18 months.

First off I would like to thank the band, Jonny, Richie, Stevie and Big C for agreeing to take part in the project and have a camera shuvved in their faces over the past 18 months. Rather you guys than me. Hopefully it will all be worthwhile in the end.

Next up is the Attica family. Alan, Gem (for keeping Big C in check), Suz (for the jokes), Linda (for mothering me), Emy, Christie, Lisa (for the wrestling banter), Simon, Petrina, Linzi, Donnie, Nick (for not killing me in Ibiza), Neil and Sheila. I'd like to thank you all for welcoming me in to the family and putting up with me. I look forward to seeing you all at future Attica and other gigs in the future. I'm sure I've missed out plenty of you but I could be here all day.

Last but not least I'd like to thank family and friends. First of all there is my mum and my little bro Keith. Without them pressuring me to listen to Ruin Nation the whole project would not have came about. I'd also like to thank Keith for doing camera work also. Now on to friends. I'd like to thank Michael, Greg, Calum, Alyson, David and Steph for putting up with me talking about this project for the past two years. I don't know how you did it. The same goes for my former work buddies, Johnny, Angela, Teri (my fake little sis), Danielle, Chris, Nats, Conzo and Golder. I'd also like to thank Jen (sorry we never really hit it off) and Gail (for being the best person I know and being a good enough friend to kick me up the arse when I need it). Again there are probably plenty of others I missed out but I could be here all night.

The past 18 months of my life have been a blast. Sure there have been a few ups and downs but on balance it has been a great experience that I wouldn't trade for anything. I can't wait till I finally put the film together for all of you to see. I hope it will meet everyones expectations. Until next time, Cheers.
Posted by Colin Wood at 15:20