Its been a while since I've written on this thing. I've had a lazy time of it since returning. I'm currently in the process of trying to get a company founded to operate under and have been generally keeping pretty chilled.

Ibiza was warm and an interesting experience. The weather was beautiful and so were the women (a lot of boobies everywhere). There was an amazing amount of orange people walking around. I stuck out like a sore thumb in comparison. I actually think I came back whiter than when I left. Here's a picture of me in action over there. 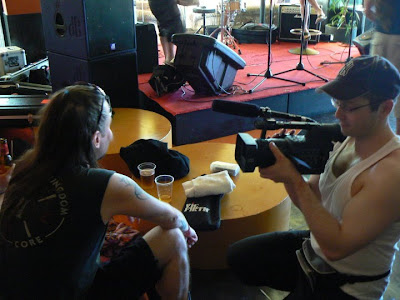 Not too exciting, I know. As for what the band got up to over there, well, I'll be saving that for the film.

Since returning I did some sit down interviews with Roddy MacAudio about the album for some studio blogs I am throwing together for him. They will start appearing in the not too distant future. I was also out shooting mountain biking out near Lanark with my colleague Calum MacPhail. In the process of being eaten alive by midgies and trying to not fall on our backsides we managed to collect some decent footage which Calum edited together in the below video.

Next on the agenda is to continue moving forward with my business plans, getting my self back in to shape, and filming introductions to the band members for the film. I will be posting the 15 Times Dead set (from the Catty last year) soon. Other than that I think it will be a pretty uneventful summer in terms of filming work. So until next time, laters.
Posted by Colin Wood at 13:06