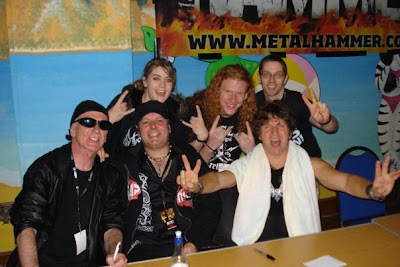 Last week was a massive week for myself and Attica Rage. On Wednesday I assembled a crew of merry men and managed to shoot a full length Attica Rage set, with no less than 7 cameras, and also the support bands Dog Tired and 15 Times Dead. At this time I have only had a look at the footage from the hard camera taking the feed from the desk. I'm glad to say that for the most part it sounds awesome. A huge relief since it was the first time I have done this. I will be assembling the footage probably towards the end of next week.

The following morning it was onward to Hard Rock Hell 3 in Wales. The experience exceeded my expectations as far as the footage I was able to get. Without getting specific, there were numerous developments within the band concerning their direction in 2010. I also got to meet an icon from my childhood in the form of Neil Buchanan (Art Attack) who was there performing with his band Marseille. See the above photo. Top guy. I caught many other bands over the weekend, including, Logan, RATT, WASP, Queensryche, and Lauren Harris.

I'd like to thank the band for having me along and making me feel so welcome. I'd also like to thank the HRH management for giving me near enough full access to the festival. The only down low points for me was the lack of decent food and gym facilities. Bad food and no exercise makes Colin a tired boy.

The next step in the documentary is coverage of the guitar tracks on the new album. Pretty routine stuff in comparison to last week but necessary none the less.
Posted by Colin Wood at 16:28